skip to main | skip to sidebar

80 And It's My First Birthday Party 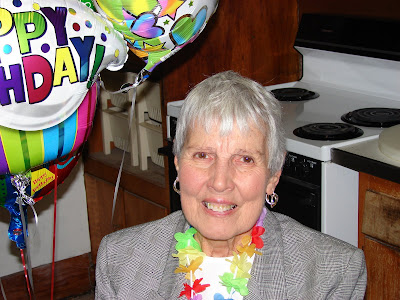 I would love for you to meet my friend Ginny. She is a soft spoken happy go lucky person. She is very sweet and she laughs all the time. I met Ginny a couple of years ago when I was doing business with her husband Bob. We spoke and said hello to each other, but it ended there. Over the coarse of two years each time I seen her our conversations got a little longer. Then back in October Ginny told me her heart wrenching life story!

In 1935, her father left her mother and three children, they were devastated! She said her mother worked what jobs she could find, but she had to pay someone to watch her 3 children. The youngest was 5, Ginny was 6 and her brother was 7. Her mother paid someone $1 a day to watch them. By the time rent and utilities were paid there was nothing left over for food. She said her mother struggled for two years. Then in 1937 after the great flood Ginny's mother made the decision to put the children in an orphanage.

Ginny was 8 years old, she said she cried day and night for two solid weeks and would not eat a bit of food. The orphanage called her mother to come pick her up. She said it was one of the happiest days of her life. But it was short lived, her mother kept her for about two months but just didn't have the money to feed her. So back to the orphanage Ginny went. She lived out the rest of her days at the orphanage until she became an adult. She said they worked every day at the orphanage doing all the chores that needed to be done. Every month they changed jobs. The children at the orphanage went to public school, but were shunned by all the other students.

When Ginny became an adult and left the orphanage, she said she had one skirt, one shirt, one pair of shoes, two pairs of panties and two pairs of socks. She said she was determined to make something out of herself and show the world she was not a piece of trash! Her very words! She retired after 30 years working for The Federal Reserve Bank.

The part of the story that stuck in my mind the most, was the fact that she had never had a Birthday Party in her life!! She said when she and her brothers were in the orphanage and it was their birthday, they would stand at the window hoping to see their mother. As night fell they realize she was not coming and they would cry their self to sleep! I am crying as I write this because I can imagine the loneliness and disappointment these poor children must have felt!

Not having any children of her own, I decided I would do everything in my power to give a her a birthday she could remember. So yesterday Craig and I went to see Ginny and Bob, and we had a small birthday party for her. I wish you could have seen the look on her face! And yes she cried! She told me no one had ever done anything like this for her! She ask me why I would do such a thing and I told her that she had touched my heart in a special way and I could not forget her story.

Sometimes I forget how blessed I was as a child. We were poor but my mother always made our birthdays as special as she could. 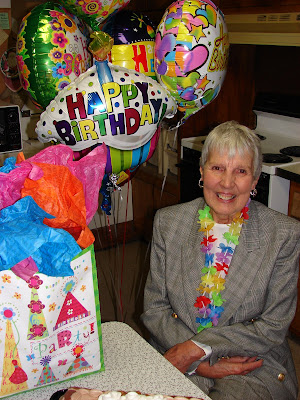 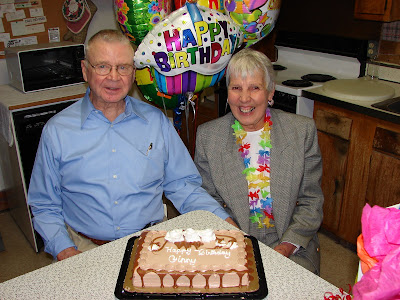 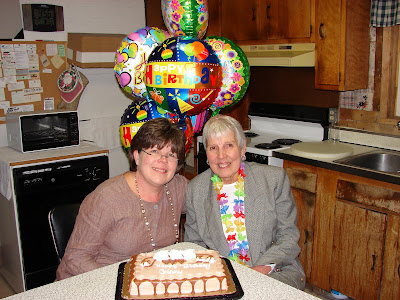 Happy Birthday to Ginny!!!!
Thanks for sharing this wonderful story..blessings to you TOT..deb

What a heart wrenching story! I couldn't help but cry! I hope Ginny had a wonderful birthday! She's so lucky to have you for a friend! Thank you for sharing her story...

80 and that cute! Happy Birthday Ginny.Its amazing what treasures we find sometimes standing right next to us. I am so glad you told her story it gives us all hope and faith that even the storms of life can turn into a beautiful day.

What a wonderful gift you have given to each other! You, a party to her. And she, an appreication to you. Congrats to you both. Thanks for sharing this special time, Theresa. ~Mindy

she is a doll & so are you. how wonderful! what a story ~ we are always soo blessed & need to be grateful/thankful for everything!love.love.love the post! how touching. you both were kissed by an angel. hugs & blessings, vikki ♥

Oh, Theresa, what a sweet and kind person you are. Ginny looks so happy. Just goes to show you, that it's never too late for some things in life...

Oh wow, what a touching story. Ginny IS a doll, and I'm so glad you were thoughtful enough to give her the birthday party she never had. We need more people like you in this world!

It was a very nice thing , you did for your friend, Hope you both had a good time.

Oh Theresa, that has got to be the sweetest thing ever, what you did for her! I send her many Happy Birthday wishes and I hope she has a very blessed year.

What a wonderful story, HAPPY BIRTHDAY GINNY! I can't imagine living in an orphanage. From what i've read of that time is wasn't uncommon.

Okay,,,that it soooo sweet! What a good friend you are. That story serves to remind us all how good we do have it. Those who don't, please don't give up hope. 2009 HAS TO BE better than 2008.
xo lulu
p.s. is she the friend who sent you photos of NYC?

What a wonderful thing to do! Happy Birthday Ginny!

You are an angel at work Theresa, what a wonderful, sweet thing to do!! A BIG Happy Birthday to Ginny!! Your friendship is the best gift ever ...
and thanks for sharing the story.
~Debra

TOT, I want you to be my BFFL!! What an absolutely unselfish and thoughtful thing to do. If you don't mind sending me your address, I'd like to send something to Ginny. BTW, she does NOT look 80!!! Tn'T debdann@att.net

What a beautiful blog! Love your birthday story and have loved looking at some of your older posts! Great decorating style...I shall return to peek around some more!

She does NOT look 80! Well that was so sweet of you...what a sad story. Why didn't she have children? Why didn't her mom at least visit? Life can be so unfair.
All wrongs will be righted one day, won't they?
Can I send her a gift?

What a wonderful and at the same time sad story. Its wonderful you each came into each others lives....Happy Birthday Ginny!
Cheryl

Theresa, what a beautiful way to begin a new year...to give someone a gift they longed for and never received as a child. Mayron doesn't comment but asked me to tell you that Ginny's story touched her heart. It was a wonderful thing you did. Happy Birthday, Ginny!
marcie

Doesn't it just make your heart sing when you do something special for someone out of the blue.

Theresa, you are just that kind of a person, I expect that out of you. You are kind and generous to a fault and I'm glad to count you as one of my dearest friends!

Thanks for this wonderful story!!!

Hi Theresa,
What a lovely birthday gift you gave to Ginny. I know it's a day late, but Happy Birthday, Ginny!

What a great post. My great grandfather was left on the step of a church as a child and raised by the sisters there. They even gave him his name. Sometimes we forget how blessed we are, but thank you for reminding us all, Theresa!

Now, what flavor was that cake?
~Tracie

Oh my, I have tears in my eyes reading your story. You've given Ginny such a beautiful memory. More stars in your crown as we like to say here.

Theresa, that is the sweetest story, the birthday part. Happy Birthday Ginny!!! How sad for a child to be abandoned. None of us will ever quite know how she suffered, but friends like you certainly make a difference in her life. She is blessed to have you. Thank you for sharing her with us! c.

Theresa, I sat here and cried my eyes out when I read Ginny's story, and then when I saw the pictures of her party, I blubbered like a fool, snot running out of my nose and everything. As I read the story I just knew Theresa would do something about the birthday party problem... As you may know, my kids are all from orphanages and they never had birthdays or clothes or anything. My beautiful son Luke said the most touching thing when I asked him if anyone had ever loved him back in China. He said, "Yes mom, you did." It is surely a sad start to life, but look what Ginny has done! She has filled her life with purpose and love and wonderful friends who give her great memories.

This is a wonderful story and a BIG HAPPY BIRTHDAY to GINNY from me......and many blessings to you for your kind gesture.

New Year Greetings to you, Theresa, from Tokyo! And Birthday Wishes to Ginny too! How kind of you to do this & I was touched by yr post. I was not wanted at birth, didn't hv any toys nor parties either so I know how it feels. I am having the time of my life now, with a great husband & 2 fabulous kids so things do seem to work out in the end.

My goodness. I would die as a mother to have to leave my children. My heart aches for the whole lot of them - mother and children. Really makes me put the rough financial times I have gone through in perspective. GOD BLESS YOU for having the birthday party. What a strong determined woman she is and what a loving heart God gave you.

I hope Ginny has parties for the rest of her birthdays!!!

Happy Birthday Ginny. You deserve so much happiness.

What a sad, yet sweet and touching story. Ginny is blessed to have a friend like you! She looks like such a great lady..Happy Birthday Ginny...Blessings to you, Theresa!
xxxooo Ruth

Theresa, that was so sweet of you. Both of my grandparents were orphans that came from large families. They entered the same orphanage in 1933, once they turned 16 and 17 they ran off and got married. There are so many sad stories from that era.
I am sure Ginny wil not soon forget your generosity and the love you bestowed upon her.

Hi Teresa,
I have enjoyed visiting your blog & this story about Ginny touched my heart so deeply. Before my mother died young she would always make my birthday special & a child remembers this forever even in their grown up heart. Here's wishing Ginny a very Happy Belated Birthday!!!! Teresa it is people like you doing such a kind & special thing that makes the world a better place. Thank you for making Ginny's birthday special.

time worn interiors
I love to decorate! I love anything that has old crusty paint that is peeling and flaking off! I love architectural salvage! And last but not least I love RUST! I enjoy taking a piece of junk and turning it into something useful. 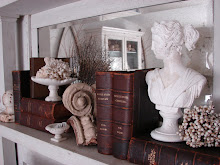 Look for me here!

Click here to see 4 small videos of my home! One video will pop up and there are 3 others in the side bar to the right! Enjoy! 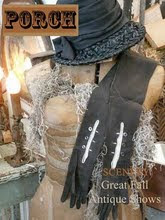 I was happy to make the pages of this issue! Click on picture to get your copy!